I know this entry is actually called Top Ten Tuesday hosted  by That Artsy Reader Girl and I had the full intentions on posting it under that title on Tuesday but I got stuck in school work that I had to stop writing so I’m doing this meme as a normal blog entry instead!

I’m super excited for today’s theme which is: Longest Books I’ve ever read. And because I love long books – only if they amaze me, tho – I’m just going to write this entry instead of doing my homework.

The longest book I’ve ever read was the fifth Harry Potter, Harry Potter and the Order of the Phoenix and because it was my longest book I remember its length very well. Furthermore, I remember because it just felt so long to me. But that’s not the normal case, I currently reread HP and the Half-Blood Prince which is also very long and it felt like 200 pages because I loved it so much.

All of the Mortal Instruments novels WEREN’T SHORT but City of Heavenly Fire was the longest.

I am a huge fan of Cassandra Clare’s The Dark Artifices and therefore I thought these books were to short rather than too long because I wanted the story to go and go on and go on and never end. 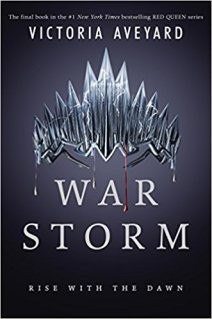 After reading the – a little bit disappointing  – third novel of Victoria Aveyard’s Red Queen Series I was a bit concerned about the length of this book because I didn’t want a looooong boring book all in one. Afterwards, I noticed I didn’t have to worry in the first place because WAR STORM was incredible!

Twelve year old me was OBSESSED with the third novel of Stephenie Meyer’s Twilight Saga and in fact, I read it eight times IN A ROW!!! I can’t believe I actually did this because nowadays, I dislike Twilight (I can only hardly accept the movies although I like the first one haha) and when I read the first page of the third novel again to write this post, I literally could HAVE PUKED.

And another of JK Rowling’s Harry Potter novels is on my list, but I simply don’t mind: the more of Harry, the better!

Twelve year old me was not only obsessed with Twilight but also in love with Rick Riordan’s Percy Jackson. And because I loved Percy I also read The Heroes of Olympus: House of Hades and other than Twilight, I still like Percy and btw, also love the movies.

I really liked the novel given to me by my beloved aunt, Scythe by Neal Shusterman, which is so different from all the fantasy books one reads.

Those are my LONGEST books but to be honest: it could be that I forgot some of my longest ones because these were only the first ones in my mind! I hope you enjoyed this entry and have a great day!